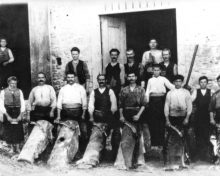 Tanning in Karlovasi flourished between 1880 and 1930, when more than 50 tanneries operated with 300 workers and the exported leather products amounted to an average of 12.4% of the total island’s exports … At the end of the 19th century, in parallel with the industrial development of the Eastern Aegean, two dynamic industrial branches were created in Samos island, the tannery in Karlovasi and the tobacco industry in the city of Samos. Despite fierce competition in the wider region and the limitations of semi-autonomous Hegemonic Samos in terms of foreign relations, the development of a banking system and its own currency, industries had flourished for more than half a century. The first small tanneries on the island appear in the first quarter of the 19th century, on the outskirts of the city of Samos (Port of Vathi) in the area called “Tabakika”. But their course was short and without success. Probably the location near the city was not favorable, in the closed bay, where the stench of the sewage, caused discomfort and their operation, nuisance to the residents of the capital and to the administrative authorities of the Hegemony. Tanning in Karlovasi flourished between 1880 and 1930, when more […] 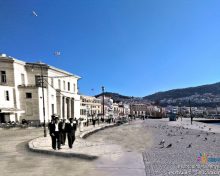 Samos in between years (photo Album) 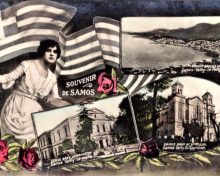 The Unification of Samos with Greek country

On November 11, in front of a crowd of people in the courtyard of Agios Spyridon church, Th. Sofoulis, in an emotional speech, proclaimed the union of Samos with Greece … “The Treaty of London” which recognized the new Greek country. Wall painting in the Greek Parliament After the successful end of the Greek revolution of 1821 against the Ottomans and the establishment of the new Greek state in 1830, Samos, although it had overthrown the Ottoman yoke, was not included to the new state. This development had disappointed the Samians, who protested towards the great powers, declaring that their fight will continue. In order to bring peace and balance to the Aegean Sea, the great powers began intensive negotiations with the Sublime Porte (Sultan) on the fate of Samos, which never had a permanent Muslim population (read more). Ultimately, the outcome of the negotiations was the Organic Order of the 10thof December 1832, which formed a peculiar semi-autonomous hegemonic status (Principality) for the island of Samos. The flag, of hegemonic Samos The Organic Order of 1832, as well as the subsequent Detailed Maps of 1850 and 1862, stipulated that the ruler of Samos would be appointed by the Sublime […] 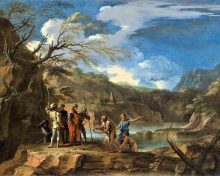 Select category and discover the island

Events Pro  |  Info: There are no events created, add some please.
Top
error:
At Samosin we use cookies : We use cookies to personalize content and ads, provide social media features, analyze our traffic, but also to ensure you a top and hassle-free browsing experience. More information about cookies can be found here.