On Saturday, July 25, 2020 at 21:00 o clock, within the framework of the 9th Summer Island Movie Festival (SIMF), the Samos Cinema Club will screen the film “Paths of Glory” , in the courtyard of the “Mavrogenios School” in Malagari Samos, Free entrance

Paths of Glory is a 1957 American anti-war film co-written and directed by Stanley Kubrick, based on the novel of the same name by Humphrey Cobb.

The film begins with a voiceover describing the trench warfare situation of World War I up to 1916. In a château, General Georges Broulard, a member of the French General Staff, asks his subordinate, the ambitious General Mireau, to send his division on a suicide mission to take a well-defended German position called the “Anthill”. Mireau initially refuses, citing the impossibility of success, but when Broulard mentions a potential promotion, Mireau quickly convinces himself the attack will succeed. 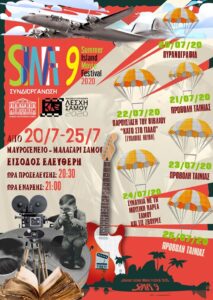