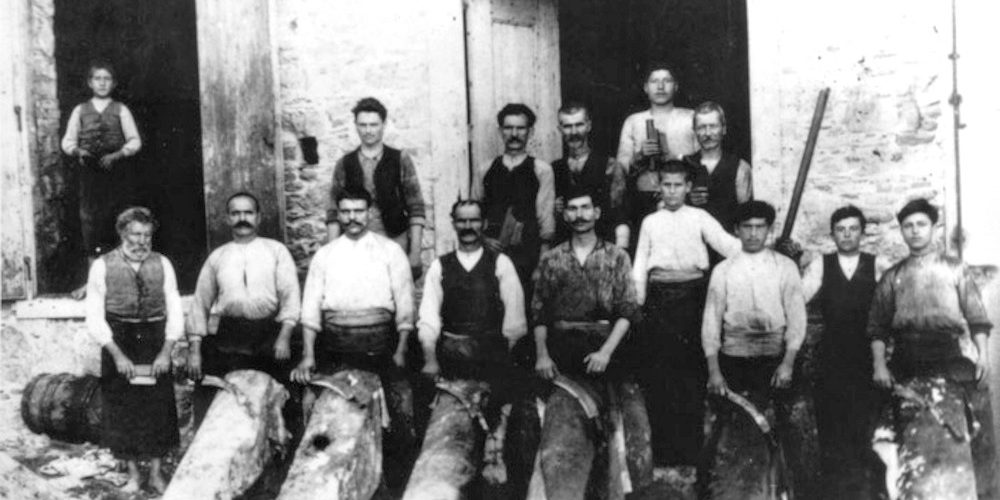 Tanning in Karlovasi flourished between 1880 and 1930, when more than 50 tanneries operated with 300 workers and the exported leather products amounted to an average of 12.4% of the total island’s exports …

At the end of the 19th century, in parallel with the industrial development of the Eastern Aegean, two dynamic industrial branches were created in Samos island, the tannery in Karlovasi and the tobacco industry in the city of Samos. Despite fierce competition in the wider region and the limitations of semi-autonomous Hegemonic Samos in terms of foreign relations, the development of a banking system and its own currency, industries had flourished for more than half a century.

The first small tanneries on the island appear in the first quarter of the 19th century, on the outskirts of the city of Samos (Port of Vathi) in the area called “Tabakika”. But their course was short and without success. Probably the location near the city was not favorable, in the closed bay, where the stench of the sewage, caused discomfort and their operation, nuisance to the residents of the capital and to the administrative authorities of the Hegemony.

Tanning in Karlovasi flourished between 1880 and 1930, when more than 50 tanneries operated with 300 workers and the exported leather products amounted to an average of 12.4% of the total island’s exports, with a maximum of 24% in 1888 and a minimum of 0.6% in 1894. It was a key factor in the Samian economy and became the regulator of the island’s economic life, while contributing significantly to the upgrade of the economic, cultural, educational and social level of Karlovasi.

The first tannery was created in the early 19th century, in the coastal area of Riva, by cavafy (=shoemaker) Panagiotis Vassos, from Argos, who empirically and with primitive means, processed sheepskins of local animals for the needs of his shop.

The increased demand for leather, both from the domestic and the market of Asia Minor and the Vassos’ success encouraged other Karlovasi residents to proceed in the same business direction, creating in the middle of the 19th century the first small tanneries in Karlovasi. In the suitable and flat location Riva, far from the city center, with ease of transport, near the mouth of a great stream, with a large coastal zone on the open seas for the dispersment and dissolution of sewage, and plenty of water required to process the leathers.

The tannery in Riva Karlovasi had now been consolidated, with dynamic growth, and the Tanzimat reforms (1839-1856) in the Ottoman Empire in an effort to modernize it, at the administrative and economic level, played an important role in this. The abundance of the wider area in pine bark (bran), acorns and schnapps which were necessary materials of plant origin, acting as binders, for the processing of the leather, gave in fact a comparative qualitative advantage to the Karlovasi shoe-sole and other types of leathers.

In 1863, for the first time, an official reference was made to the existence of “industrial shops”, in an official document of a municipal decision, related to the lighting of Karlovasi. By 1868, tanning workshops were already 16 and demanded that the hegemonic administration reduce taxes on exported “tanneries goods.” In 1874 the units more than doubled and the businessmen had formed a guild, demanding that measures be taken to protect the domestic tannery industry.

The beginning of the Russo-Turkish War (1877-1878) and the sharp increase in demand for leather by the Ottoman army created new growth prospects, contributing significantly to the modernization and industrialization of tanneries. The unexpected increase in turnover strengthened and improved the existing tanneries while attracting important investors of the city (Nikolaou, Vliamos, Ioulios Argyriadis, Ypsilantis and others), who would invest new funds for modern tanneries.

In 1890 the tannery of Riva Karlovasi passes from the pre-industrial period to industrialization, when Dimitris Ypsilantis builds the first motorized tannery with a steam locomotive for the cutter, the mill that grinds the pacifier and a mechanical hammer. In the same year (1890) the first steam mills were put into operation after the establishment of a corporate association, for this purpose.

The parallel development of trade and shipping, as well as its favorable tax treatment (mainly after 1890) by the Hegemonic government of Samos, significantly strengthened the tanneries business. In addition, the completion of the construction of the Port in Karlovasi in 1903 (started in 1871), the construction of the equestrian tram in 1905, to facilitate transport and the establishment of Chambers of Commerce in 1906 in Karlovasi and in 1907 in Vathi, helped the industry to take off.

The largest and most modern tannery in Riva was owned by Georgios Nikolaou. It had an optimal organization, both in terms of administration as well as the production process, with modern equipment that ranked it among the first in the Balkans. The tannery employed 120 workers, with an annual production of 190 – 260 tons, in various leather qualities such as leather, waterproof, sever, padlocks, patent leather, and even leather straps for industrial machines. Nikolaou initially funded other tanners with low interest rates of 9–10% (compared to the 20-25% which was the norm at the time), provided he was allowed to monitor the borrower’s tannery. In this way he extracted information about the operation and vulnerabilities of tanneries, which he used in the best way when he built his own, at the end of the 19th century.

The most important protagonists of the industry were the workers, who worked in a laborious job that required skill, strength, and cooperation, with many risks and low wages. They often worked unpaid on Sundays, in the fields or in the garden of the owner’s house, the so-called “maga”. During the pre-industrial period, working conditions were miserable, as workers were exposed to many diseases such as tuberculosis, pneumonia, bronchial or tetanus germs, which are present in the skin and hair follicles of the animals. With the development of industry, health conditions have improved, but the risk still remained. At the same time, a law was enacted by the Hegemonic Administration, which prohibited Sunday work, while in 1899 the union of employers and workers “Brotherhood of tanners Prophet Elias” was created and in 1908 the union of workers “St. Panteleimon Brotherhood of workers”, safeguarding the interests of the workers.

With the development of tanning in Karlovasi, the need for plant-based tannins (mainly pine bark) was great and the damage to the forests from the peeling of the pines was great, which forced the Hegemonic government to take strict measures (around 1890) for their protection. However, the reduction of plant-based binders and the increase in the use of chemical processing methods were the first to emerge in the industry, as the Karlovasi leathers lost their comparative quality advantage due to treatment with plant-based binders.

After the union of Samos with Greece, in 1912, the tanning of Riva (and the economy of the island in general) had to face several difficulties that were created during its integration with the Greek state. The island’s trade with the nearby markets of Asia Minor was interrupted and new markets and trade routes had to be sought, but also to adapt to the new distances. In addition, Greek law did not include tariff easing, standard customs certifications were overturned, telegraph connections with Asia Minor were cut off without replacement with the Greek state, and problems arose in their ferry services as the Samian ships had to. It took a long time for the Karlovasi tannery to overcome the problems and adapt to the new data, but thanks to the flexibility, experience, entrepreneurial spirit and accumulation of tannery funds, they managed not only to advance the industry, but also to conquer the first place nationally, with 47 tanneries in 1920.

The outbreak of World War II and the occupation of Samos by Italian forces in 1941 were to mark the beginning of the end of the Karlovasi tannery. The production process and trade had almost ceased while the Italian occupying army confiscated all the processed leather, resulting in the collapse of the industry. After the liberation of the island in 1944, a very small number of tanners tried in vain to recover. Greece’s volatile economic situation in the following decades, the over-indebtedness of tanners, the newer chemical binders and the widespread use of plastic as a substitute for leather, made the epilogue to one of the most important chapters in the island’s economic history.

Memories of this important branch are the ruins of tanneries, the amazing architecture mansions of tanners, on Agios Nikolaos Street, and the Museum of Tanneries created around 2008, under the auspices of the Municipality of West Samos, wich presenting in the best way the tannerings in Riva of Karlovasi.

Ask about Samos
Ask about Samos
You have not filled all fields
Your message is being processed, please wait
Comment successfully sent
Captcha failed to verify
Sending failed, try again later
Ask about Samos island
Frequently Asked Questions Page (FAQ)
error:
At Samosin we use cookies : We use cookies to personalize content and ads, provide social media features, analyze our traffic, but also to ensure you a top and hassle-free browsing experience. More information about cookies can be found here.